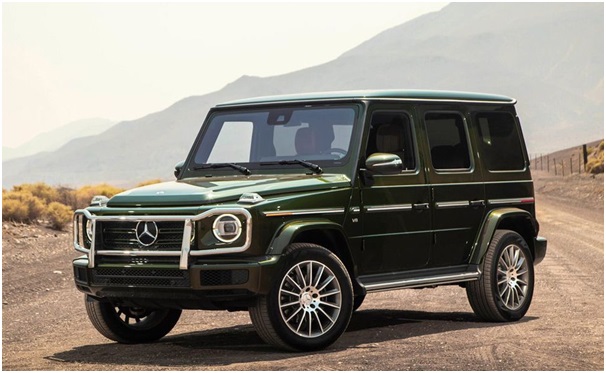 The G-Class from Mercedes-Benz has proven to be quite a success for the automaker, even since its inception. But, if you go by the looks of it, the G-Class neither appears too elegant or too sophisticated for a car of this class, especially given the fact that the company has stuck to the same design formula over the years.

It almost appears like the design is drawn out of scale. However, what works in favour of the G-Class is this design only. Although the design of the G-Wagen is quite far from being glamorous or elegant, it is without a doubt extremely brawny. And therein lies its beauty. Over the years, people have accustomed to its brawny design, giving it an iconic status among other off-roaders thus far.

Speaking of off-roading, the brawny G-Class is not just an iconic that’s scorching fast on the tarmac, it’s an impeccable off-roading machine too. So much so, Mercedes-Benz says the G-Class has the guts to go just about anywhere, from a winding section of road to an off-beaten path.

The question therein lies to whether actually, an owner’s going to take his/her novel G-Class to an off-beaten path or not. Well, that’s on you. Here’s a full model overview of the Mercedes-Benz G-Class to give you a full understanding of this iconic Mercedes.

It does take a while to spot the differences between the previous-generation model and 2018, third-generation one. Although it does look every bit a G-Wagen, there are a host of changes on the outside.

Under the hood, the iconic SUV is powered with either a petrol or a diesel engine. The entry-level engine here is a 2.0-litre twin-turbo V6 diesel unit, which is capable of churning out 286bhp and 600Nm of torque. The higher-variant of the Mercedes-Benz  G-Class comes powered with a 4.0-litre V8 bi-turbo petrol engine, which is good for 577bhp and 760Nm of torque. Both the engines are mated to the same 9-speed gearbox.

In the case of fuel efficiency, do not expect the Merc to deliver any mind-numbing numbers. Of course, the diesel engine here is rated to deliver better fuel efficiency around 10km/l. As for the petrol engine, expect somewhere around 4-5km/l.

All the details regarding the Mercedes-Benz G-Class, namely, the engine, specifications, variant wise equipment, colours, dimensions, interiors, and exterior details are extensively covered in the brochure.

As of mid-2020, the Mercedes-Benz G-Class is available in two variants, either in the diesel-automatic or the petrol-automatic configuration. The prices start at Rs. 1.50crores for the G 350d variant going all the way to Rs. 2.19 crores for the G63 AMG variant (all prices ex-showroom, Delhi). For the variant-wise on-road prices, visit us at autoX.  Also, grab the latest info on the upcoming cars, only at autoX.